In honor of my 30th year, I decided to participate in the Steep Ravine trail run in Stinson Beach, a small coastal town just 3 hours from Mendocino, and about an hour north of San Francisco.  I originally set my sights on it because of the 30K, which I decided is the perfect distance (since I crapped out at about 18 miles during my marathon), and because I'd be turning... 30!  November and December passed by and I still hadn't managed a run longer than 6 miles, so in my heart of hearts I downgraded my expectations to the half marathon, and eventually, the 7 mile run.  Still an awesome and memorable way to turn 30, right?

We camped in an RV park in Olema - arrived after dark and left the next morning in the dark!  It happened to drop below FREEZING temperature, and I shivered all night and hardly slept at all.  Then, my iTouch crapped out and my alarm didn't go off!  Luckily, my seester was on it and we made it to the start line in time.  The day donned sunny and bright and clear.  I couldn't have asked for better weather.
We took off at 8:20 a.m. (no official clock or timing chips) and began the long climb up the Dipsea Trail and eventually the Steep Ravine Trail.
The way was absolutely beautiful, with moss covered bridges, waterfalls and clear pools all alongside the trail.  I didn't have a camera, but wished I had.

I was running well, and only walked one or two times on the really steep uphill, and obviously on the ladder.  Almost at the top of the climb, and somewhere around the 3 mile mark, my "peloton" of runners veered off the trail marked for the 7mi. course and entered the second loop designed for half marathoners.  Probably 10 minutes later we realized the folly and somehow a group of us decided to keep going.  It was a decision I eventually was really glad I made, but anger at the group, and at myself for following so blindly, boiled up.  I didn't sign up for 13.1!  I know my body's capabilities and I only trained for 3 miles of climbing, not 7!  But somehow I knew I could do it.

We kept on running through a beautiful section of forest with undulating-but-mostly-downhill trail, and then hit a steep downhill section.  We were met by Muir Woods and lots and lots of tourists on the trail!  The trees were absolutely gigantic and the air was cold and wet.  Since Muir Woods is practically back down at sea level, I knew I had another 1000+ ft. climb ahead.  I was out of water at this point, and forced myself to choke down the mini Cliff Bar I brought along.

The second climb was challenging, to say the least.  I walked a large portion of it, and almost stopped a few times because my climbing muscles were giving out, which has never happened before!  The trail continued to be slightly confusing, and we stopped many times to deliberate our course.  After finally coming out of the trees and cresting the open headland fields a final time I was elated!  The aid station finally appeared ahead, and I loaded up on water, gummy bears and M&Ms.  The next three miles were downhill.
My support crew actually drove up onto the headlands to look for me - after 2.5 hours of missing-Lindsey they were worried!

I finished totally happy and stoked, despite my wrong turn and failing quads.  I psuedo-showered at the beach shanty, and we then indulged in breakfast burritos and coffee in the early afternoon sun.  Because we accidentally ran the Half Marathon course backwards we supposedly missed out on some mileage, for which the race director added 8 minutes to our time.  My stats are as follows:

I love bread.  I also love cheese.  Even better, I love cheese and bread (aka a cheese sandwich?).  But this post is really about my recent quest to bake our own bread - gluten free for me, and gluten-full for him.

After two years of living in a yurt with no kitchen (see my other blog Building Mom's Yurt for gobs of entertainment and beautiful yurt photos) I was super stoked to move into our new place and fire up the slightly-used gas oven we found on craigslist. 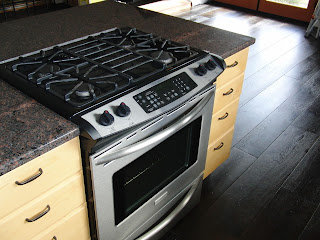 Actually, I'll admit to an interim period where I "fired up" my mom's old Hitachi bread machine.  I got a good 6 or 7 loaves out of it before the motor unceremoniously crapped out and refused to move faster than one revolution per hour.  So I called upon my Apple Green KitchenAid Stand Mixer and Frigidaire oven and have had some great success.

I first used a delicious rye bread recipe from Smitten Kitten.  OMG.  Delicious and fail proof (re only one fallen loaf in 5 attempts!).  I usually alter all recipes to fit what I have on hand, which is the novice baker's equivalent to walking on a tightrope over a pit full of alligators.  But E eats it all.
Ignore my psuedo-bangs and frog-smile.  Just focus on the huge loaf.  I also have been making gluten-free bread using the recipe from the Moosewood Restaurant Daily Special cookbook for years and have never made a bad loaf.  But it was time to try something new, and yesterday I found this recipe from Gluten Free Gobsmacked.  True to form, I modified it slightly because I'm temporarily obsessed with millet.  I also may or may not have used a loaf pan that was too small.

So, all in all this has been an excellent way to spend my rainy day off.  Bread tastes good and smells good and I can hardly do without when training for a marathon.  Oh yeah, I'm going to train for another marathon!  More info to come....
No comments:

Run Through the Colors!

E and I traveled to the beautiful town of Nevada City in the sierra foothills at the end of October with plans for me to join my sister in the Sierra Club's Run Through the Colors 10k and 5k.

The colors weren't quite as spectacular as in the photo above, but you get the sense that the race is well named nonetheless.  The course was beautiful and hilly.  The air was crisp and chilly.  The breakfast afterwards at Ike's Quarter Cafe was to die for.

We didn't get a lot of awesome photos from the race, but the pre-race photos are out of this world (?).  Apparently, I think I am way too cool for school.  And my sister. 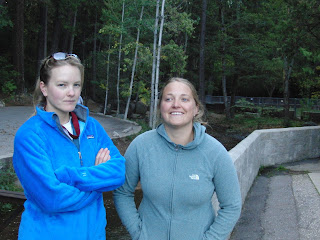 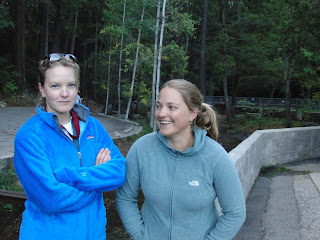 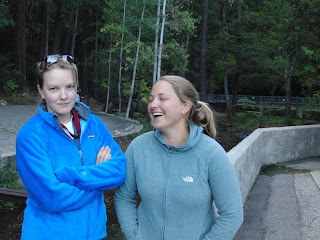 I placed third in my Age Group - first placing ever!  No medals, but the wonderful mountain scenery, challenging hilly course, and delicious "Plain Jane" breakfast special and multiple cups of coffee afterwards were all worth it!
No comments: