I LOVE baseball, and more specifically, I love the Giants.  I did not start loving them in October of 2010.  No, I started loving them when I moved to California in 2004, moved in with a dude who loves baseball and has the world record for farthest object ever thrown (not a baseball), and who also had a television and cable.  I've always loved baseball, thanks to my dad who taught me how to swing a whiffle bat as soon as I could walk.  Summer evenings after dinner found my whole family in the side yard playing two-on-two whiffle ball until it was dark.  I joined ponytail softball, and then little league where I played as the only female in the entire league until 8th grade.  I can throw hard and far, and hit home runs.  I haven't played much since then, but ball is always fun and always on our summer evening barbecue to-do list.

So that's me and baseball.  Last summer when I found out the San Francisco Giants were hosting a 5/10k and a 1/2, I was so excited.  Couldn't pull it off last summer, but this summer I lured both non-runner sisters into running with me, with promises of Tim Lincecum bobbleheads at the finish line for all.

The Giants haven't been doing so well this half of the season, so we were doubtful of actually witnessing a win.  We watched the Friday evening game against the Astros and won in typical Giants fashion.  The racer's expo was at the stadium that night and it was then and there I decided to downgrade my entry from the 1/2 to the 5k and run with my sisters.  Switching was no problem, but I obviously didn't get any money back.  Bummer. 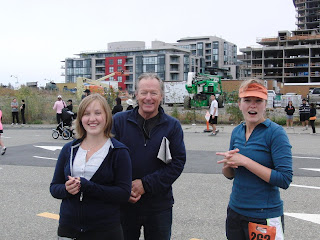 Saturday morning dawned cloudy and slightly chilly.  Perfect running weather if you ask me.  We hopped on the muni that runs down the Embarcadero to AT&T Park.  We made a quick pit-stop for pre-run donuts and coffee, and continued to the start, located in the stadium parking lot.  The racers started in 3 waves, which allowed us time to chat, mill around and get chilly.  We also passed RIGHT by Matt Cain, my all-time favorite player!  Highlight of the day! 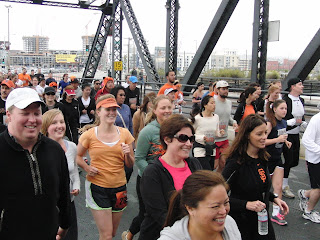 We ran a decent pace in the beginning, and I noticed we were too fast to maintain an actual running pace for 3.1, so I tried to reign us in for the sake of youngest seester.  Nonetheless, she called it good at around 1 mile and put in some time walking.  We got her going again and she made the turn.  She really wanted to walk again, and I told her we could walk while under the Bay Bridge, which was a perfect 1 or 2 minute break.  Amazingly, she made it to the finish line without walking again, and we had a blast. 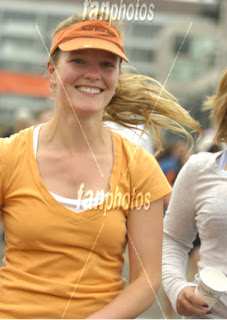 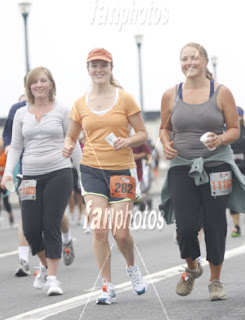 39:29 is obviously a huge underachievement for me, but is also a 5k PR!  First and only, baby.  My foot hurt pretty much the whole race, and the whole rest of the day after that.  I was glad I didn't run 13.1 miles, but also really disappointed, as I had been anticipating the Half for a long time. 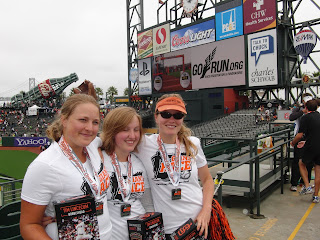 And finally, the finish was a major major clusterfuck.  Granted, all my races have been really small so far and I have no comparison.  However, The 5k started 1.5 hours after the 1/2 and 10k, which means a majority of the 1/2 marathoners are trying to cross the finish line at the same time as 3000 mediocre/walking 5k runners.  Combine this with a finish chute the width of the warning track and you have a finish line FAIL.  It took us 5 minutes to cross the finish line, another 30 minutes to make it off the field and up into the stadium, another 30 minutes to get our finishers food, T and bobblehead... not fun.  No time or room to stretch post-race, just stand-still crowds milling in cattle-chute isles.  Oh well. 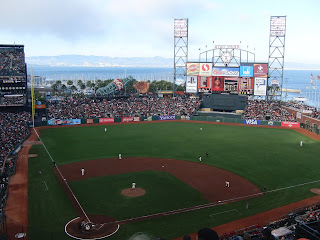 Post run we had delicious mexican food and beers at the Ferry Building and walked the Saturday Farmer's Market.  Giants won again that night, and the weekend was a success!

August = grappling with disappointment. I wish I had been able to keep up with blogging and running and dailymile while dealing with my injury but I couldn't bring myself to check any of it.

I took a vacation to Jackson for a friend's wedding and skipped two low milage weekly runs.  I had a 12 miler scheduled the day after my return, and ran it just fine - felt great, in fact!  Two days later I ran 5 miles at a faster-than-usual clip (August 15).   I felt 100% fine after the run, but woke up in the middle of the night to pee, stood up and gasped at the pain.  I could barely walk to the bathroom.  Woah.

I decided to downgrade my 13.1 Giant Race entry to a 5k race entry (a $95 5k!!!!!!!!!!).  This was a mixed blessing because I got to run the race with my seesters, but had major disappointment.  I'll recap the 5k in another post, but at one point during that weekend the pain became so intense I thought for sure I had just experienced a fracture.

I did another 2 hour stint at the Health Club upon return from the City, and have since logged 3 runs of increasing distance.  The pain is lessening and almost gone.  I've started icing my feet in a bucket after ever run, no matter how short.  I've been stretching my arches and NEVER going barefoot (not that I went barefoot at all really before this injury).

It's been a difficult month to bear, and I feel apprehensive about my marathon, which happens in 19 days.  I've skipped a total of three long runs: 19, 13 and 20. This is difficult to swallow because it happened so far out from my actual marathon that my last month of training is tapering instead of peaking.  I've wrestled with skipping the marathon - deferring to next year, downgrading to the half - but decided to just do it.  I've read so many inspirational stories of people who run marathons and just finish them.  I will have to walk, no doubt.  I will have to throw away any and all expectations of time.  I will have to hold my head up high and enjoy the day despite my training not going to plan.  I will have to decide if I want to go through all this again and give myself another shot at running a marathon injury free.
No comments:

Miles Planned/Ran: 92. Bummer. Several of these were elliptical miles.
Rest Days Planned/Taken: Way more taken than planned.
Highest Mileage Week: 35, in which I ran my first 18 miler.
Long Runs Planned/Ran: I think three really long ones were planned, only 1 was run.
Current Book: Don't Let's Go to the Dogs Tonight. Excellent book.
Current Shame-Inducing Guilty Pleasure: Ice cream and Beer. Two things that should not be on my consumables list.
Current Obsessions: Thinking about moving out of the yurt. Where's all our stuff going to go?
Current Drink: water, coffee and home-brewed iced tea - Oh, and Clifshot electrolyte lemonade.
Current Song: That 'Light it up, like it's dyn-a-mite" song
Current Wish-List: A day off, sleeping in, a massage, a huge homemade veggie burger with onion rings, a Patagonia down vest, a shower, a hot tub, etc.
Current Need: A place to stay in Half Moon Bay during the marathon.
Current Triumph: Still rocking away on the house. Main room floor + cabinet + granite countertops installed by 9/1, bathroom and bedroom flooring to follow!
Current Bane of my Existence: Major, major stress about my foot. I think I've diagnosed plantar fasciitis, and it prevented two long runs this past month.
Current Goal: Finish the Half Moon Bay Marathon. Enough said.
Current Blessings: Foot pain that has ~lessened~ with huge amounts of rest, ice, arnica massage and HOPE.
Current Excitement: Hmmm. Brunch next Sunday at the Westport Hotel? Moving out of the yurt? My MARATHON?