First photos ever posted on my blog. Hmmm... 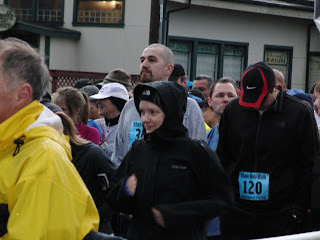 lining up in the gates - it's pouring rain and freezing cold 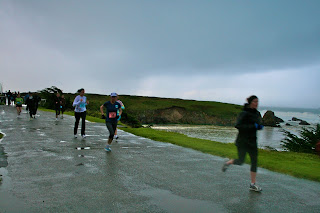 running just past the Pudding Creek trestle - it's still pouring and starting to hail.

Email ThisBlogThis!Share to TwitterShare to FacebookShare to Pinterest
Labels: photos

My second race ever was completed on Saturday. I'd never considered doing a race report, but I think it's a good idea for the future. I often re-read my blog posts and learned a lot from things I otherwise would have forgotten about my training. So here goes!

On the days leading up to the race, I tried to take it easy. I ran 5 miles at a really fast clip on Wednesday, desperate to get in some 'higher mileage' before my 6 mile test, and then rested Th. & Fri. I think my quads were a little sore and tired from this on race day. I've learned that it's probably best to do a longer run a week before race day and keep the mileage much shorter in the days leading up to the race. This is a no-brainer, and part of every training plan ever, but sometimes we must learn these things for ourselves.

Friday night I fell asleep around 10 pm and subsequently woke up every two hours all night long. At 1 am I was sure it was morning, and almost put my contacts in before I looked at the clock! Funny - I felt rested and ready to go! At 6:20 I woke up, made coffee and peanut butter toast, got ready and we were in the car heading north at 7:00. I was completely undecided on what to wear right up until the race started, but left the house wearing black capris, my orange patagonia bra top, and my blue nike dri-fit warm top (best decision of the day), my rain jacket, and a north face fleece ear band. I also had on a pair of sweatpants that I decided to ditch before hitting the starting gates, which was also a really good idea.

It was COLD. And raining. Since this was only my second race I had no idea what to expect, but the start was much the same as last year - everyone runs WAY faster than me in the beginning. I guess I'm just a hard-ass when it comes to my pace, but I just didn't/couldn't imagine going fast just for the sake of going fast. Hmmm. About 1.5 miles down the road, at the 5k turnaround, it started hailing. Seriously hailing. It hurt. I was so glad I had my rain jacket on to protect my skin. Then the lightning and thunder started. Three big ones hit right next to us and scared the crap out of me. I think everyone was looking around waiting for someone else to quit, stop, or otherwise run for cover, but everyone just kept running!

When we hit the 2 mile mark I was Shocked. WHAT?! ONLY 2 MILES? I was in total disbelief. By this time the trail was covered in an inch of hail, we were completely frozen (most runners were much more poorly dressed for the elements than I was), and it continued to rain. I could not have imagined worse running weather. The only saving grace of the day was the lack of wind, which, in retrospect, is amazing considering the strength of the storm front we were facing. I trudged another mile to the 10k turnaround where Erin was spectating (alone - no surprise given the weather). I tossed him my now-drenched rain jacket as the weather seemed to be lightening. "Are you going to keep going??" he called out incredulously. Yup. He later told me that many of the 10k runners thanked him for being there. :-)

I was glad I ditched the jacket. My pants were already soaked, and my legs were really really cold. I ran a good pace to the 4 and 5 mile markers, and then my IT band started to really make itself known. It had hinted at tightness during mile 4, but I pulled my tights up to my thigh, thinking the cold, wet cloth against my knee was making ITB even tighter. I could actually feel it grinding against whatever it grinds against after mile 5, and it really slowed me down. It hurt. My legs felt like lead weights. Adding to this, both my shoes & socks were completely drenched and had probably gained 2 pounds each of water weight. This probably also threw off my ITB.

The final 1/2 mile stretch was a GRIND. I just put my head down and tried to think of other things. Then it started hailing again. Seriously? As I rounded the final corner and saw 54:xx on the timer, I definitely picked up my pace. 54:47, 4th place female in my age group. Woo Hoo! All I can say is I finished faster than last year, which is unbelievable considering the horrendous conditions.

I have nothing to compare the Whale Run to, but I really enjoy it. The t-shirts are cotton, the post-race snacks are apples and bananas, and the aid station is a card table with old ladies, dixie cups and water. There is no schwag bag, pre-race expo, or post-run massage booth. Not super-glam, but perfectly low-key.

E was really supportive and wonderful, & we enjoyed a delicious breakfast burrito and several cups of coffee at the Brewery while my legs thawed out. Jeans and a hoodie sweatshirt never felt so good! I went home and took a long hot epsom salt bath and spent the rest of the day stretching, foam rolling, eating and watching TV while the storm continued outside.

Whale Run 10k is on Saturday. This morning I was up at 7 because the insulators came that early. Whatever. So 9am felt like the middle of the day and that's when I went for my run. It was E's idea, which was awesome and I didn't have to feel guilty about not working. I ran 5 miles in about (under) 45 minutes. Fast. I meant to do this run on Sunday, Monday and Tuesday but the weather has been ridiculously foul. 35 mph and non-stop torrential downpour. Today, however, was sunny! I felt pretty good, but am definitely going to rest the next two days, roll my legs till they cry, and stretch. And eat a lot. I'm really tired now and feel like a nap.

I did a 4 mile and a 3 miler last week and really wanted to add 6 to last week's count but as I said, the weather kept me down. This week will end up at 11, but I've got to get the mileage up for the 13.1 in May. I'm going to revisit my training plan as soon as I get my new computer tomorrow.
No comments:

So I ran two laps around town on Monday. I spent 30 minutes pre-run trying to guarantee myself a 3 mile lap - I set up multiple scenarios until I thought I had ensured a 10K. I set out for the long two-lap haul and upon returning, reentered my actual route and discovered that I'd only run 5.8 miles. DOUBLE DAMN. I suppose it's close enough to the actual thing to call it good...

Two days later my quads still feel sore and tingly from the run. I put down another 4 miles today with Jill and I can no longer squat. So things are good.
1 comment:

I've used runner's world training program creator in the past to figure out how far and how often I should be running while I pretend to train for races. Ahem. With the Whale Run coming up I was again inspired to enter my single race time, & add my desire to train moderately hard over 4 weeks, to receive general guidance on my schedule. However, I was not impressed with the resulting plan. I believe it may have inspired me to create a custom plan. Custom. For me only.

Also add to this the fact that I'm constantly being asked to run with Jill and Blair! They seem to run willy nilly - 4 miles really fast whenever they want to! Hmmm. Not my style. I'm excited to incorporate runs with them to increase my speed, but not regularly. I need to up my distance if I've any hope of completing a 1/2 marathon this year.

And.... on to THE STICK. I mentioned this torture device at xmas and am reminded yet again that every run I do is made possible by THE STICK. When the ITB flares up, I roll it post-run with THE STICK until I can't breathe. I remain, mostly, pain free. I do still feel like I'm precariously balanced on the ridge between health and injury, so I appreciate each run to the utmost and use THE STICK regularly.
No comments:

Yahoo. Running again, this time with .... buddies! Yes, I ran for the first time since college with a new group of folks. New running buddies are named Jill and Blair, and boy do they -cook-. That might have been my fastest 4 mile run - ever.

And February. I think I completely took February off of running. I had two major backcountry hiking/ski/snowboard trips planned back to back and didn't want to risk my knee flaring up (or other injury) right before my snow time. Between trips I logged about 20 miles of intense uphill, snowy hiking, including major vertical (we won't talk about the search and rescue operation it took to get us out on day three of trip two after 6' of fresh in 48 hours. Holy Shit.).

So march will be good to me, I'm sure. We're coming up on the 1 year anniversary of my running, as the Whale Run approaches. I am surely planning on running the 10k but don't have a lot of hope of beating last year's time due to my "rest month".
1 comment: